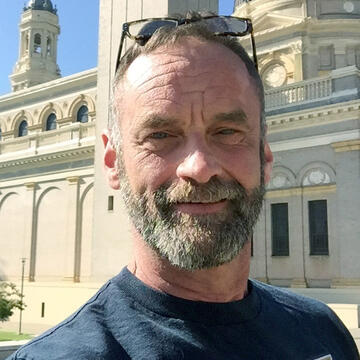 Stuart McKee is an Associate Professor of Design at the University of San Francisco. As an environmental graphic designer, Stuart has designed exhibition typography for the J. Paul Getty Center in Los Angeles; the Rock and Roll Hall of Fame and Museum in Cleveland (as Senior Graphic Designer for the Burdick Group; San Francisco); and the United States Pavilion at the 1992 World's Fair in Seville, Spain (as Senior Graphic Designer for Staples & Charles Ltd; Washington, DC). As a print designer, Stuart has designed publications for the MIT Press, Princeton Architectural Press, Chronicle Books, the University of Hawaii Press, the Office of the Chief Architect, and the National Science Foundation. He has received recognition for these projects from the Industrial Designers Society of America (IDSA), the American Institute of Graphic Arts (AIGA), and the Society of Environmental Graphic Designers (SEGD). In 2007, Stuart was awarded a generous "Ideas That Matter" grant from Sappi Fine Paper to propose, design, and produce a publication to service the San Francisco nonprofit organization Visual Aid.

Stuart is active as a design researcher and writer. Stuart is currently preparing a book-length manuscript that examines how British and American colonial printers informed the native encounter with Western civilization during the early nineteenth century. The bulk of Stuart's previous research examines the ways in which contemporary design artifacts represent their users and inform their cultural identities. His publication record includes papers for the journals Inform, Visible Language, and the AIGA Journal of Graphic Design, and research articles for the magazines Print, Eye, and Emigre. He has presented research papers at two AIGA national conferences, The Power of Design conference in Vancouver in 2003, and the America: Cult and Culture conference in Las Vegas in 1999 and a variety of international conferences. In 2012, Stuart collaborated with Professor Anne Bush of the University of Hawaii to propose and develop the international conference Geographics: Design, Education and the Transnational Terrain in Honolulu, HI and served as co-editor for the conference papers published on Iridescent, the ICOGRADA journal.