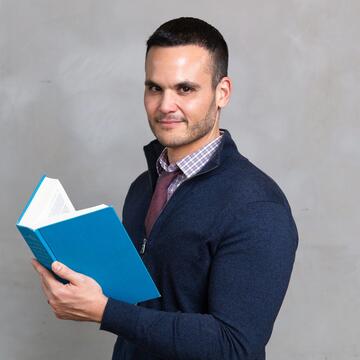 Dr. Omar F. Miranda is Associate Professor of English and Comparative Literature. He received his PhD in English and American Literature from New York University and specializes in the literatures of the eighteenth and nineteenth centuries, especially their transnational, global, and diasporic contexts. He is currently working on a book manuscript that tracks the origins and rise of the culture of global celebrity in the Romantic period. He is also part of an editorial team assembling the new Routledge Handbook to Global Literature and Culture in the Romantic Era. His recent article, "The Global Romantic Lyric" (The Wordsworth Circle, 2021) won the Bigger 6 Article of the Year award in 2022 from the Centre for Eighteenth Century Studies (CECS) at the University of York, UK.

His asynchronous online course, “Romance, Revolution, Exile,” fulfills the C1 CORE Curriculum requirement and is offered to all USF students during the summer and January intersession terms. The class focuses on the lives and works of celebrity authors of romance and exile, including Francisco de Miranda, Germaine de Staël, Lord Byron, and Mary Shelley, all of whom lived during and participated in their global age of revolution. His other introductory and upper-level literature courses at USF have included “Multimedia Jane Austen,” “The Gothic Obsession,” “The Literature of Exile,” and “Literary Theory.”

With Dr. Deidre Lynch (Harvard University), Dr. Miranda currently serves as co-Vice President of the Keats-Shelley Association of America (K-SAA). He is also the founder and director of a digital platform and app dedicated to poetry recordings of all kinds and for all audiences.