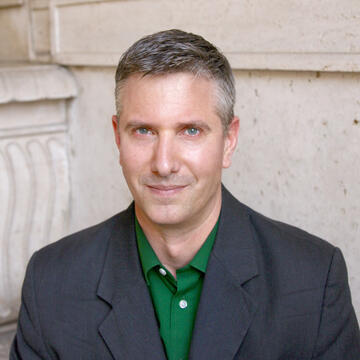 Nathan Dennis is an assistant professor in the Art History and Museum Studies programs at USF. He specializes in late antique and medieval art and architecture, particularly of the Mediterranean and Near East, including the material and visual traditions of Western Christian, Byzantine/Eastern Orthodox, Jewish, and Islamic cultures. He received a PhD in the History of Art from Johns Hopkins University, writing his dissertation on the pictorial, material, and liturgical strategies employed in early Christian baptisteries to create and manipulate visions of paradise. He is currently revising that study for publication as Paradise Regained: Reconstructing Eden in the Early Christian Baptistery. He is also the editor (with Robin M. Jensen and Nathan P. Chase) of Baptisteries of the Early Christian World (2 vols.). The work documents, through both the print volumes and a searchable database, every known baptistery from the third to early-seventh century and examines regional variations in architecture, decoration, and liturgical function. He has published or is currently completing additional art historical and archaeological projects related to late antique and early medieval North Africa, early medieval Rome, and the role of visual hermeneutics and sensory perception in early Christian art and theology.

Nathan has held a number of travel fellowships for research in Europe, North Africa, and West Asia, and he is a fellow of the American Academy in Rome.