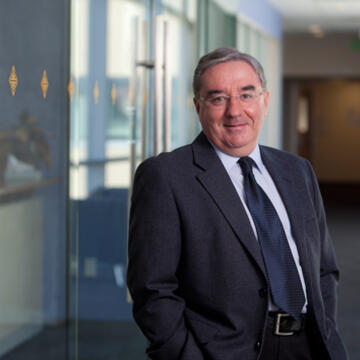 Mike Webber is a Professor in the Department of Sociology. He received his MA and PhD in Sociology from the University of California, Santa Cruz, and also received an MSc(Econ) in Industrial Relations from Cardiff University and a BSc(Econ) in Politics and History from Aberystwyth University. He is a political sociologist whose research focuses on the power structure of the United States, particularly the relationship between business and politics during the New Deal era. He teaches courses in Sociological Theory, Social Movements, Political Sociology, and Globalization.

He is the author, with G. William Domhoff, of Class and Power in the New Deal (Stanford University Press) and New Deal Fat Cats: Business, Labor and Campaign Finance in the 1936 Presidential Election (Fordham University Press). He has also published in journals such as the American Political Science Review. He served as department chair before spending over ten years in university and college administration as Vice Provost of Academic Affairs (2014-2016), Dean of the School of Management (2011-2014), Associate Vice Provost (2010-2011), Associate Dean (2007-2010), and Director of Assessment and Program Review (2003-2007).