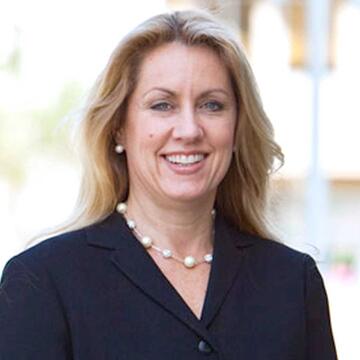 Jennifer Turpin joined USF's faculty in 1991 after receiving a doctorate in sociology at the University of Texas at Austin. She has received USF's Distinguished Teaching Award and the College Service Award, as well as an honorary doctorate from USF in 2015. She founded USF's Women's Studies program and served as chair of the sociology department before spending 17 years in the university administration, as provost (2010-2015); dean (2003-2010); and associate dean (1997-2003).

Her research addresses the causes and consequences of violence, the role of gender in warfare, the sociology of the Cold War, and the impact of Russian media on the dissolution of the former Soviet Union. She has published several books, including Reinventing the Soviet Self (Praeger); The Web of Violence (co-edited with Lester R. Kurtz, University of Illinois Press); The Women and War Reader (co-edited with Lois Ann Lorentzen, NYU Press); The Gendered New World Order (co-edited with Lois Ann Lorentzen, Routledge); Rethinking Peace (co-edited with Robert Elias, Lynne Rienner), and the 3-volume Encyclopedia of Violence, Peace and Conflict (co-edited with chief editor Lester R. Kurtz, Academic Press), and numerous articles, book chapters, and papers at professional meetings.

Professor Turpin served as chair of the American Sociological Association's Section on Peace, War and Social Conflict as well as the Peace and Justice Studies Association. She has served on a Western Association for Schools and Colleges (WASC) accreditation team and as a program reviewer for institutions such as the Catholic University of Ecuador and the University of Limerick, Ireland. She is currently involved in several higher education networks, including the Centre on Critical Thinking based in Hungary and Spain.