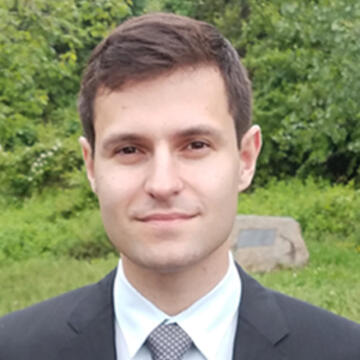 Herman Nikolayevskiy received his BE in Chemical Engineering from Cooper Union, a primarily-undergraduate institution in the heart of NYC. After a transformative undergraduate research experience, Herman was inspired to pursue a PhD in Organic Chemistry at Yale University, where he focused on the total synthesis and computational analysis of bioactive natural products under Professor Seth B. Herzon. After leaving New Haven, Herman did his postdoctoral work at the National Institutes of Health (NIH) with Dr. Daniel H. Appella, where he employed NMR spectroscopy to study the mechanism of action of thioester-based HIV inhibitors.

At USF, the Nikolayevskiy group will leverage its expertise in synthetic chemistry and mechanistic analysis to explore the therapeutic potential of molecular “off-switches” as a strategy for increasing the tolerability of anticancer chemotherapies. Students in the group will develop novel methodologies for the efficient synthesis of programmable, bioactive molecules and probe their kinetic and thermodynamic tunability using biophysical techniques. This work has the potential to expand the repertoire of clinically available cytotoxins, and may be useful in related areas of interest, including logic-gated polymers and molecular diagnostics.