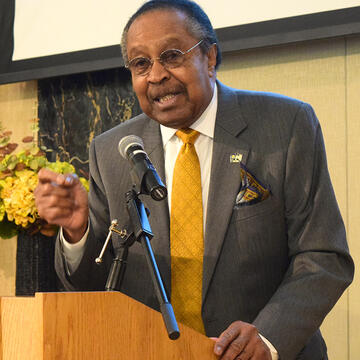 Clarence Jones served as speechwriter and counsel to Martin Luther King, Jr. from 1960 to 1968 as an Allied Member of the New York Stock Exchange (NYSE), and in the Wall Street investment banking firm Carter, Berlind & Weill becoming the “first Negro” on Wall Street. He coordinated the legal defense of Dr. King and the other leaders of the Southern Christian Leadership Conference against the libel suits filed against them and The New York Times by the police commissioner and other city officials of Birmingham, Alabama. The Supreme Court ruling in this case – Sullivan vs. The New York Times – resulted in the landmark decision on the current law of libel. In April 1963, he drafted the settlement agreement between the City of Birmingham and Martin Luther King, Jr. to bring about the end of demonstrations and the desegregation of department stores and public accommodations. In August 1963, he assisted Dr. King in the drafting of his celebrated “I Have A Dream” speech that he delivered at the March On Washington, August 28th 1963.