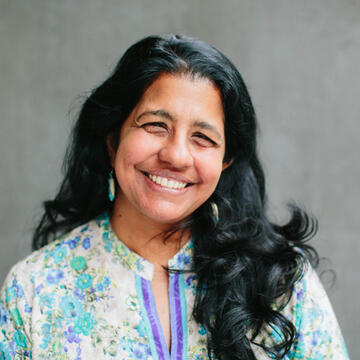 Professor, Co-Director of the Tracy Seeley Center for Teaching Excellence

Aparna Venkatesan is a cosmologist working on studies of “first-light” sources in the universe. She also works actively in cultural astronomy and space policy. She is recognized internationally for her research and DEI leadership, featured widely in the media, and received numerous prizes and awards. Dr. Venkatesan is deeply committed to increasing the participation and retention of underrepresented groups in astronomy and the sciences, and is active in developing co-created scientific partnerships with Indigenous communities worldwide. Dr. Venkatesan has worked with numerous undergraduate students in her research; 90% have been women and/or minorities, and about half have gone on to STEM careers. In the past few years, Dr. Venkatesan has been leading work towards preserving space as a scientific, environmental and cultural resource for humanity, given the growing privatization of space and the rising impacts of satellite constellations in low-Earth orbits. She has also been featured dozens of times in the past year in major news publications, media, and events.