The Depravities of War: Sandow Birk and the Art of Social Critique 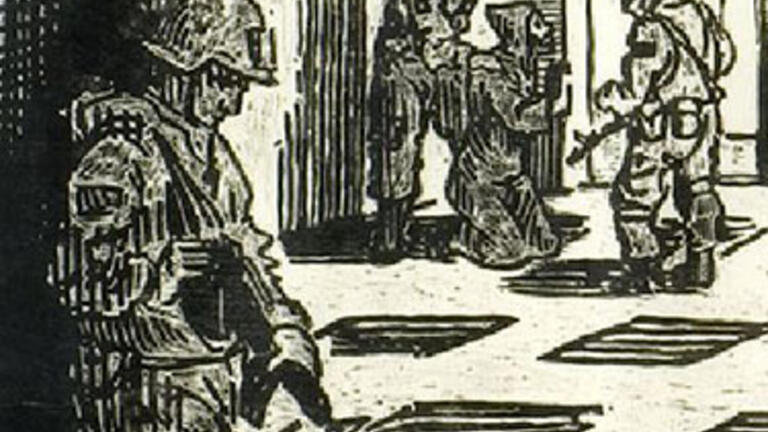 Los Angeles-based artist Sandow Birk is known for his poignant works of art that are often critical of important political aspects of contemporary life. Frequent themes in Birk’s work range from politics, war, and violence to urban life, surfing, and skateboarding. Birk regularly draws on art history for inspiration. His 2005 series The Leading Causes of Death in America is inspired by the works of George Bellows, while his recent illuminated manuscript, American Qur’an, draws parallels between Islamic traditions and contemporary American life. A graduate of the Otis/Parsons Art Institute, Birk is the recipient of numerous grants, residencies, and fellowships. He is represented by galleries in New York, Los Angeles, and locally at Catharine Clark Gallery in San Francisco.

Worlds in the Making: New Ecological Rituals by Christina Conklin 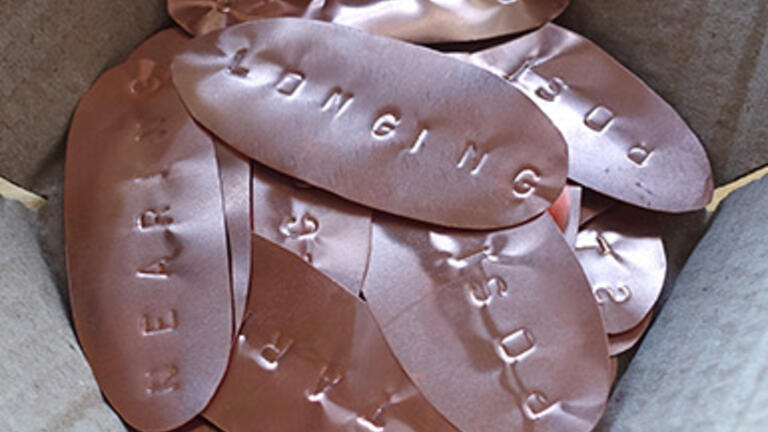 These four site-specific, interactive works invite visitors to take stock of their personal and collective roles in climate change, both at USF and in the larger world.

Informed by a variety of spiritual practices, these installations reinterpret rituals as catalysts for greater ecological awareness and action. They include Carbon Confessional; Infinite Vessel; Mappamundi, a collaborative study of the University’s ecological footprint; and Return Again, a temple-like space for introspection. Marking Pope Francis’ recent call for “integral ecology” and taking its title from Svante Arrhenis’s 1908 book on the evolution of the universe, this timely exhibition proposes that the intersection of science and spirituality is an essential field of inquiry as we enter the Anthropocene Era. 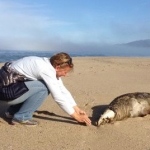 Christina Conklin is an artist, researcher, and writer living in Half Moon Bay, California. Her art explores the intersection of belief systems and natural systems with a focus on climatic and cultural change of the ocean. She has exhibited in private and University galleries throughout the Bay Area and in Oregon. She is currently serving on the Public Advisory Committee for the San Mateo County Sea Level Rise Vulnerability Assessment to develop programs to build awareness about sea level rise.

Once Upon a Time: Jamil Hellu 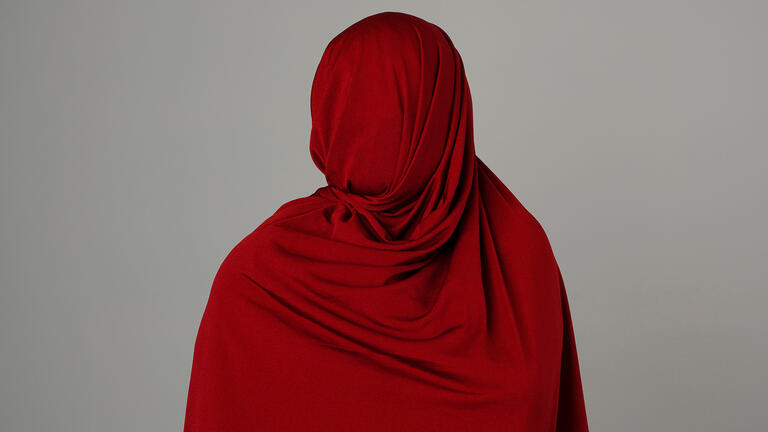 On view in Thacher Gallery through October 23 are a collection of arresting photographs, screen prints, and videos by San Francisco-based artist Jamil Hellu. The artist’s work explores the complex intersection of Arab and queer identity, themes especially relevant in this time of violence and war in the Middle East.

Drawn from seemingly disparate realms of cultural representation, language acquisition, and the artist’s Syrian roots, these works startle and amuse as they reveal elements of Hellu’s unique narrative. By presenting the familiar art of self-portraiture in unexpected, often shape-shifting formats, Hellu invites us to grapple with what kinds of visual cues form our perceptions of others even as he reminds us that identity is deeply individual.

Hellu currently teaches photography at Stanford University where he received his M.F.A. in art practice in 2010. He was awarded the 2015-2016 Kala Art Institute Fellowship in Berkeley and was selected for the Artist-in-Residence Program at Recology San Francisco in 2014.

"My father’s family is from Syria, originally from a town in the northwest called Mashta al-Helu, from which I bear my last name. This body of work was first conceived after I saw news footage of blindfolded Syrian men being tossed off high buildings by ISIS because of their perceived sexual orientation. Looking for ways to voice my despair over violence and homophobia in the Middle East, I started to produce works claiming my own Arab roots. What does it mean to negotiate my Syrian ancestry as a gay man in such a conflict-ridden world? My recent works bring the friction between Syrian heritage and queer identity into focus, investigating the conflicts that emerge at the intersection of Middle-Eastern roots and queerness.” 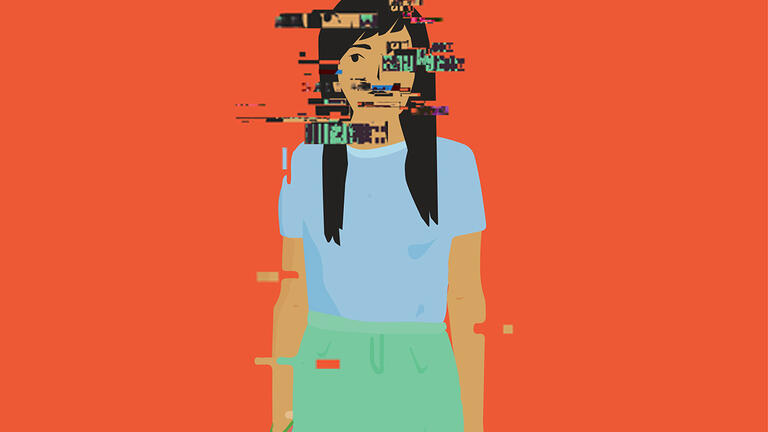 Im{print}ed is a juried exhibition of juniors and seniors from the University of San Francisco’s Department of Art + Architecture and is presented by students enrolled in the Art History/Arts Management Thacher Practicum course. The over 60 artworks were selected by a jury of four artists and arts professionals, including: Marlena Cannon de Mendez, Amanda Hughen, Delaney Kennedy (’13) and Geri Montano.

Student curators write, “This year’s title, Im{print}ed, relays the lasting effect the surrounding world has on us and the imprint this influence makes on our imaginations and the art we create.” 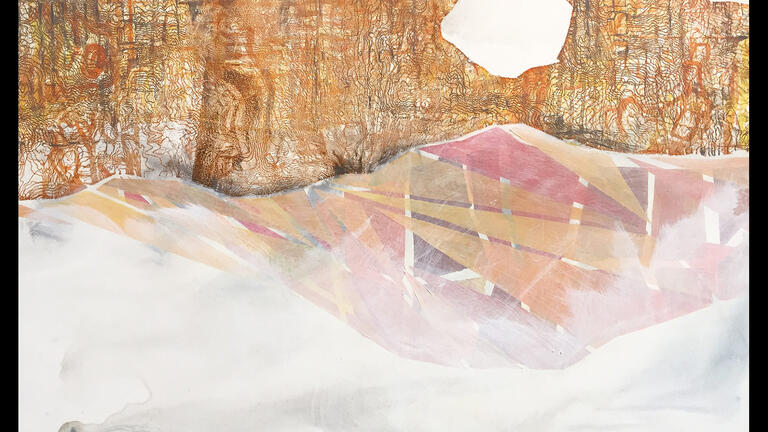 Adjacent Shores presents new work from the collaborative team of San Francisco artists Amanda Hughen and Jennifer Starkweather. On view are mixed-media artworks that map the Pacific Ocean, as well as selections from the artists’ recent Shifting Shorelines and Bay Bridge series.

At the center of the exhibition is the artists’ response to an 18th century Japanese map, which will also be on display in the gallery. The Japanese map, created by Confucian scholar Nagakubo Sekisui, is an interpretation of Matteo Ricci S.J.’s 1602 map of the world. Informed by Sekisui’s historic map as well as 21st century tools and data, Hughen/Starkweather’s abstract representation of the Pacific addresses current environmental issues including sea level rise, shore erosion, and the great Pacific garbage patch.

For this project the artists also created a new collection of artworks based on interviews with USF community members, whose specialties range from cartography to poetry to environmental studies. Each interview probed a personal memory of the Pacific Ocean, information about the specific location where the memory occurred, and projections about what that place might look like in 50 years. The resulting abstractions take us on a journey around the Pacific, highlighting locations including Japan, Hawaii, the Philippines, and areas along California’s coast from Humboldt Bay to Big Sur.

This exhibition was curated by Nell Herbert, MA candidate in Museum Studies, and is presented in conjunction with the Ricci Institute for Chinese-Western Cultural History’s Mapping “The East”: Envisioning Asia in the Age of Exploration, on view in Manresa Gallery March 30–May 22, and the Asian Art Museum’s China at the Center: Rare Ricci & Verbiest World Maps, on view March 4­–May 8. 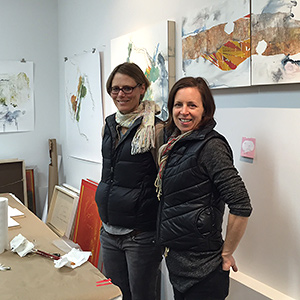 Hughen/Starkweather past projects include San Francisco’s Market Street (2006-7), the Marin Headlands (2008), Airport Systems (2009-2010), the San Francisco-Oakland Bay Bridge (2010-2013), the Asian Art Museum (2014), and Shifting Shorelines (2015-present). They are currently working on a permanent public artwork in San Francisco’s Union Square as part of the Central Subway.